(AFP) – Iranian judges, media officials and a special police Internet monitoring unit linked to the death of a dissident in custody were added Tuesday to the EU’s sanctions list against Tehran for grave human rights violations. 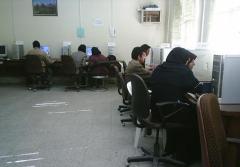 The Iranian Cyber Police unit was set up in 2011, taking on anti-revolutionary and dissident groups who organised protests in 2009 against the re-election of President Mahmoud Ahmadinejad, the European Union’s Official Journal said.

It said it was this Cyber Police unit which arrested blogger Sattar Beheshti who was found dead in his Tehran prison cell in November shortly after his arrest for criticising the government online.

Beheshti was “believed to have been tortured to death by the Cyber Police authorities,” the Official Journal said.
Among the nine individuals added to the EU’s blacklist were the new head of the notorious Evin Prison, three judges, two prosecutors and the head of a special commission, Abdolsamad Khoramabadi, in charge of Internet censorship.

In state media, the EU named Mohammad Sarafraz and Hamid Reza Emadi, senior officials linked to the security forces and held responsible for “violating the right to due process and fair trial.”

EU foreign ministers agreed Monday to renew European Union rights sanctions for another 12 months, with the nine new names bringing the blacklist to 87 Iranians subject to an EU travel ban and asset freeze.

The sanctions for rights abuse are separate from those linked to concerns over Iran’s contested nuclear drive.

A total of 490 companies and 105 people are currently targeted by an asset freeze and travel ban under those sanctions, which also include tough restrictions on trade and financial dealings, as well as an oil embargo.*