Two prisoners were hanged in Tehran’s Evin Prison early this morning Sunday May 19. 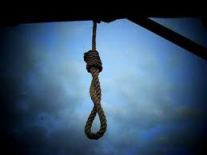 Kourosh Ahmadi and Mohammad Heydari were charged with espionage for giving sensitive information to the CIA and the Israeili intelligence service Mossad respectively and convicted of Moharebeh (war against the God).

Iran Human Rights (IHR) is investigating about the background of these prisoners.

Collaboration with foreign intelligence services is a charge commonly used by the Iranian authorities against journalists and political activists.

Since April 16 at least 62 people have been executed in Iran.*